The war in Ukraine is the first major conflict of the crypto era, and, as it happens, Ukraine itself is a cryptocurrency capital.

What was a tool of economic growth in peacetime has now, with war, become another weapon in the fight.

Millions donated to the Ukrainian war effort through anonymous bitcoin donations have been spent on thermal imagers, drones and other military equipment needed for the Ukrainian army.

Charity and relief efforts are being contributed through decentralised autonomous organisations (known as DAOs — more on them later) that also link volunteers around the world with the people in need.

The government department that had been in charge of attracting crypto industries is now tasked with keeping the country online, warning citizens of air raids and missiles, fighting Russian disinformation, coordinating with Google and Facebook, and leading an army of hackers targeting websites and other services within Russia itself.

Meanwhile, crypto has become another front in the war, with Ukraine concerned Russia may use decentralised digital money to get around the recently imposed financial sanctions. For some, crypto and blockchain are finally showing what they can do — how they can be used for good rather than for NFTs of cartoon apes.

So what effect is crypto having on the war?

From webmaster to wartime hacker

The story of LDV, who wishes to remain anonymous, is an example of the way Ukraine’s tech industry, centred around crypto, has pivoted to war. A webmaster for an investment fund based on crypto-mining, LDV woke to the news of the invasion on February 24 and tried to flee to Poland from his home in Lviv, in western Ukraine.

“We wanted to withdraw money but the queues were extremely long. If I had waited, I couldn’t cross the border eventually,” he said.

He tried to buy a bus ticket over the border but the transaction was declined, either due to cyber attacks taking the bank offline, or because the Ukranian bank was blocking international transactions.

Finally, he said, he found a friend who was willing to exchange bitcoin for Polish cash, which he used to buy the bus ticket.

Now in Poland, he’s working as a hacker in the war effort.

“I’m preventing Russian propaganda with an electronic cyberwarfare team I joined recently — kind of [like the] Anonymous hacking team,” he said.

How much has been raised through crypto donations?

Ukraine’s “IT Army” is being coordinated by Alex Bornyakov, the Ukrainian deputy minister for digital transformation, who just two weeks ago was addressing a conference in Denver, US, about the country’s long-term goal of becoming “the largest crypto-friendly country in the world.”

Crypto, decentralised finance, and other blockchain systems are part of the government’s vision for not only economic prosperity, but also independence and sovereignty from Russia — a way of building a modern service economy and drawing itself closer to the rest of Europe.

When war started, it launched an official Ukrainian crypto fund.

Within five days, this fund and others set up for similar purposes have raised over $US15 million ($21 million), according to crypto analytics firm Elliptic. This is nothing compared to the $US650 million ($897 million) in weaponry the Ukrainian army received from the US last year, but it has symbolic importance — the crypto donations are from individuals, not governments, and show the level of popular support for Ukraine.

The Ukrainian war effort is being partly crowdfunded.

The non-profit running the campaign, Come Back Alive, has raised more than $US6.9 million ($9.52 million) through crypto donations, which will be used to distribute body armour, medical kits, and helmets to Ukrainian soldiers.

This could still have happened without crypto, through the international banking system, but then it could have been detected and blocked by a central authority, such as a regulator.

With crypto, it’s impossible to stop.

Born in eastern Ukraine and currently based in London, after the invasion Ms Shevchenko helped form a DAO (decentralised autonomous organisation) that has now raised more than $US3 million ($4.1 million) in crypto for the Ukrainian army.

A DAO is a bit like a venture capital fund, but the decisions are made by an automated system and crowdfunding process, rather than a board of directors.

These processes are encoded on the blockchain, which is a network of computers running a shared software. 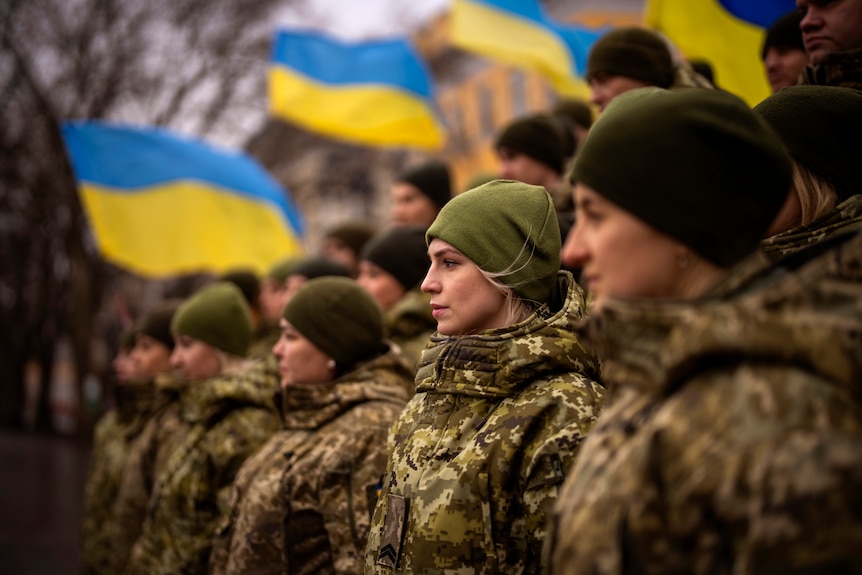 It’s both a way of raising money (often through selling crypto tokens, but also through donations) and a system for governance, requiring users (typically those who own tokens) to vote on proposals.

There are all kinds of DAOs, from business to fundraising (ConstitutionDAO, for instance, recently tried and failed to purchase an original copy of the US constitution at auction).

“I’m not a pro-war person, but when my friend calls and says my best friend is in the trenches in Kyiv and they have given him an AK without ammunition … we have to do something.”

Specifically, the group plans to support the Come Back Alive organisation.

So why not just donate directly to a charity?

“If someone wants to pick a different charity and donate to them directly, I’m more than happy they do that.”

But DAOs are not just about raising money, she said.

They’re also a way of rapidly organising and connecting people to respond to emergency situations.

Where it would take weeks or months to set up a conventional non-profit, a DAO can be “spun up” in moments.

“So many people have helped me rescue people who are stuck at the border or unable to get out of somewhere.

“Somebody in the US messaged to say, ‘I want to send insulin to Ukraine.’ I will connect them with a support group for diabetic people in Ukraine.

“Any kind of help that I need in Ukraine, I can find someone in the community who is able to assist someone else.”

‘We haven’t seen this before’

DAOs sending resources to those in need is the “big new thing” that’s emerged from the war in Ukraine, said blockchain expert Jason Potts, a professor of economics at RMIT.

“We haven’t seen this before,” he said.

“Before we had to rely on trusted international organisations like Red Cross or Amnesty International that are hard to build and expensive to operate.

“What’s striking about the UkraineDAO is how fast it happened. We didn’t realise DAOs would be used for that.”

That doesn’t mean they replace international organisations such as the Red Cross, he added, but they can work alongside them.

In the crypto communities, Ukraine is, “all anyone is talking about.”

“This is a clear demonstration of the fundamental battle-tested use value of this technology,” he said.

“It’s not CryptoKitties and stupid games on the internet; this is helping people around the world gather and organise.” “People that are wanting to donate to these causes need to do their due diligence around who’s behind these things and what their proposals are.

“It’s a much different form of participation than normal charity donation.”

Can Russia use crypto to evade sanctions?

Ukraine has expressed concern Russian banks, as well as the government and private individuals, will use cryptocurrencies to sidestep the country’s exclusion from the Swift global payments system, which facilities international transfers.

Russian hacking gangs collected about $US400 million ($551 million) worth of cryptocurrency from ransomware attacks last year, which amounted to 74 per cent of global revenue from the crime, according to a recent study.

That’s a big sum, but it’s nothing compared to the estimated $US600 billion ($828 billion) that Russia’s government has in foreign currencies and gold.

The sanctions imposed against the Russian central bank render most of these reserves useless, which has led to a collapse in the value of the rouble.

Even a few hundred million dollars’ worth of bitcoin won’t stop this slide, Dr Lane said.

Either way, he said, blocking Russians from crypto was futile.

It’s almost impossible to cut off a nation-state from trading in crypto and accessing the blockchain network, “because it exists anywhere the internet exists.”

“The network isn’t going to stop a transaction simply because the sender or recipient is in a particular geographic location,” he said.

“The only answer to that would be taking out internet infrastructure.”

He said in five years’ time, crypto might be more widely traded, which would make multinational sanctions like the ones against Russia less effective.

“We haven’t quite experienced something like this before,” he said.

Want more science from across the ABC?

Science in your inbox

Get all the latest science stories from across the ABC.

Your information is being handled in accordance with the ABC Privacy Collection Statement.

After FTX collapse, new focus on decentralization for crypto

Radu B
News
As questions swirl about how much cryptocurrencies will be worth in the wake of the spectacular collapse of the crypto exchange FTX and other...

Radu B
News
After 14 years, however, cryptocurrencies have made almost no inroads into the traditional role of money. They’re too awkward to use for ordinary transactions....